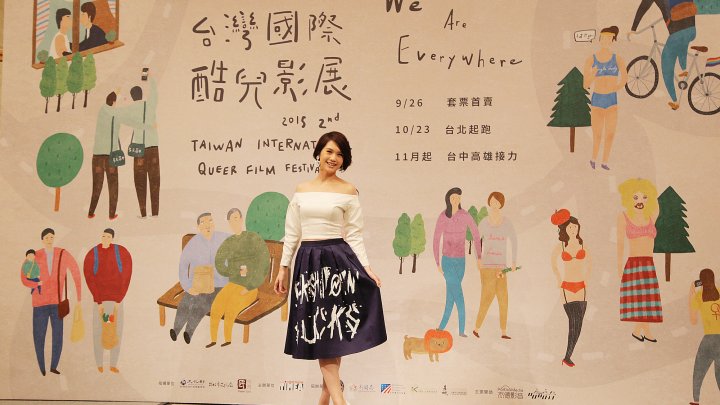 The 2nd Taiwan International Queer Film Festival (TIQFF) will be under way in October.  Hosted by Taiwan International Media and Education Association (TIMEA), the theme this year is set to be “We Are Everywhere” to pass on the message that LGBT people are among us everywhere in the society. They are much closer than some assume. If public consensus can be supportive everywhere, love can be everywhere. The Festival has included almost 100 features, shorts, documentaries and animated films from all over the world, many of them garnering high accolades at other international film festivals. Beginning on October 23rd in Taipei Shin Kong Cinema, TIQFF 2015 will proceed in Taichung and Kaosiung in November. Package ticket sales will be available on September 26th.

TIQFF debuted the first ever ambassador, Rainie Yang—the talented singer, TV show host and actress who was nicknamed “Do-it-all Girl for her success all across entertainment sectors. Rainie had always been an avid supporter for LGBT community and same-sex marriage. Co-founders Jay and Vita both expressed warm gratitude for Rainie promoting the Festival to her large fan base, accelerating the change TIQFF envisions. Rainie shared her opinions: “there really is no ‘WE or THEY’…labels are really unnecessary; it only stands in the way for communicating and understanding.” Unlike most of the guests, this was actually not her first time attending a same-sex wedding. She shared a precious memory going to a friend’s wedding: “Whenever the parents would remark on ‘getting another son in the family’ all their guests and I would get a little teary.” When asked about her thoughts on the U.S. Supreme Court legalizing same-sex marriage nationwide, she declared: “Do not be a bystander just because you’re not gay.”.

To celebrate the victory of same-sex marriage earlier this year and to raise awareness for marriage equality in Taiwan, TIQFF invited two pairs of lesbian and gay couples for the wedding, Lu &Chen and Shawn&Peter. They both showcased beautifully shot wedding photos, sharing their bliss with all attendees. They also shared with us their love stories. Two couples were very different in everything else, but both were holding hands tightly throughout the ceremony. Peter was shyer, so it was extremely adorable when Shawn grabbed the microphone and rushed to every question so Peter would not have to sweat. When the question was directed to Peter, Shawn held his hand and squeezed back as Peter’s hands twisted nervously in his. Lu and Chen had both been tireless fighters of LGBT rights and they met through volunteering. Chen carefully and patiently followed wherever she went, fixing Lu’s long gauze train as she moved around with elevated excitement. A popular author from Taiwan, Fourone, penned a custom “Declaration of Love” for the occasion from which the couples read. After the reading, they were coerced into long kisses but it was apparent that they did not mind at all. They all looked so unabashedly beautiful and unapologetically happy. Everyone is equal before love. Let’s hope all love is equal before the law soon, also.